Backing herself and reaching for any opportunities that come her way has landed an Ara Institute of Canterbury-Te Pūkenga student a glittering Australasian award for young chefs. 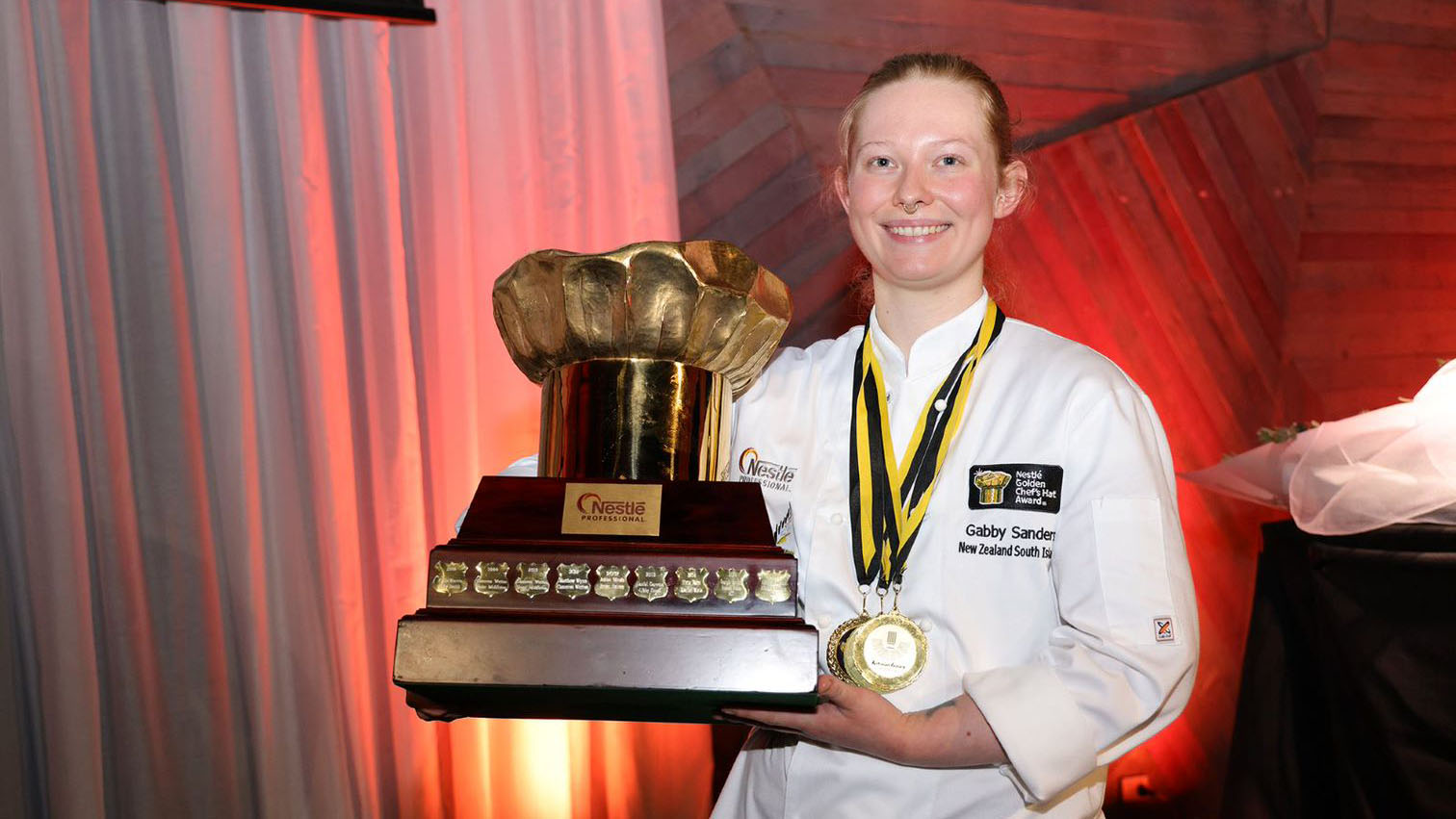 Backing herself and reaching for any opportunities that come her way has landed an Ara Institute of Canterbury-Te Pūkenga student a glittering Australasian award for young chefs.

Second year Cookery student Gabby Sanders has just been crowned with the prestigious Nestle Golden Chef’s Hat in Melbourne – scooping up a ten-thousand-dollar prize and earning her the description of “hottest rising star of the trans-Tasman culinary scene.”

Twenty-three-year old Sanders was one of 12 finalists chosen from New Zealand and Australia for 2022 after regional finals in both countries.  She took part in the final battle on the big stage at Fine Food Australia earlier this week - her first trip out of the country.

“The whole experience has been amazing. The people I’ve met have been incredible.  It’s made me realise the biggest step is pushing yourself and putting yourself out there to have a go,” she says.

The final round of the competition, to create three complex courses in three and half hours were a were a pressure-fuelled blur,” she says.

“It all feels kind of surreal. I didn’t look up once. I was absolutely sprinting.  Everyone was just running. It was so much fun – the pressure of it is why we do what we do,” Sanders says.

Ryan Marshall, manager Culinary Programmes at Ara-Te Pūkenga says the entire Department of Hospitality and Service Industries is “over the moon. We just couldn’t believe it in the staff room today – after weeks and months of hard work.”

“It’s very rare for someone to win a gold medal for every course for entrée main and dessert under such massive pressure,” he says.

Ryan says Sander’s achievement is a boost for Ara-Te Pūkenga too. “Our reputation for training chefs is known throughout NZ, now it is becoming known at an international level too,” he says.

It’s a long way from working in a Christchurch supermarket deli just two years ago and being encouraged by her boss to try the Ara-Te Pūkenga Cookery course.

“The chef I was working with said he’d really enjoyed it and I should give it a go,” she says.

Sanders says the Level 4 Cookery course was new territory for her. “It was the first time I’d done anything like this other than always being keen on food and helping mum at home.  I was probably a bit of a pain to be honest!” she laughs.

“My family has always believed food is for sharing and for bringing people together, but I’d never really considered being a chef as a career for me. I guess I never thought of myself as a ‘career person’ before because I’d never really had an idea in my head on what a career might look like for me. I was just open to trying new things and having new experiences under my belt,” Sanders says.

Her inspiration to try the Golden Hat came from the halls of Ara-Te Pūkenga, she says.

“I first saw the Golden Hat competition posters around campus and Ryan mentioned it. I tried out for the regionals last year and did OK winning a silver medal.  This year I wanted to do better.  The competition was really stiff, so I was kind of shocked when I won the South Islands.”

Sanders also works two shifts a week at the Monday Room restaurant in Christchurch – an opportunity that also came about through her study.

“I wasn’t sure if I was ready but towards the end of my first year, we were encouraged to apply to places for a work placement.  I remember being very nervous, but it was only for two weeks, and I thought what have I got to lose?  I’ll give it a go.”

Sander’s flair, maturity and willingness to learn were soon noticed by her tutors at Ara-Te Pūkenga.  One in particular, Mark Sycamore, who himself has competed in international culinary competitions, stepped in to offer extra support and mentoring in his own time.

“But it wasn’t without it’s challenges,” Marshall says. “With Gabby being so busy with school and her paid work, it was really full on helping her practice for this competition. These last few weeks have been busy. “

“But one of the things that sets Ara apart, is our staff’s wealth of knowledge and their desire to go further.  The team love to see students excel and will do so much to support them in their careers.”

Sanders is grateful for the guidance.

“Everyone at Ara has been so supportive. Mark has especially helped me realise that if you are putting yourself out there and trying hard people will make time for you and support you.  It’s made me realise things can be achievable.”

“Gabby rose to the challenge and created a flawlessly executed and perfectly balanced menu that showcased her technical skills to a high level,” Elke said.

Sanders is now focussing on enjoying the moment and completing her studies.

“I’ve met such an amazing group of people. We kind of forgot that we were competing against each other it feels like we meshed as a group.

“But now I’m looking forward to finishing this year.  I feel like my study has been on the backburner a bit while I’ve been distracted on this event!”

It’s straight back down to earth for Sanders on Monday, when she’s welcomed back to Ara-Te Pūkenga just in time to continue her studies for her Level 5 Diploma in Cookery (Advanced).